Please fill out the form to schedule your free audit today!

APJ Digital respects your privacy. We will never spam you or sell your information to any third party.

It has been reported by numerous sources this week that Google have recently hit hard with manual action penalties a large number of sites participating in ?private blog networks.? For the majority of us, either participating in or utilising private blog networks as a way to rank a site on Google has been regarded as unnatural and something which we must stay well away from, however for some, it?s been a way to provide quick wins.

Whilst many private blog networks such as Build My Rank and SAPE have received high profile penalties from Google over the past few years, these were really just the icing on the cake and the more public and widely known about and utilised ones out there. It?s probably safe to say that there?s thousands and thousands of private blog networks out there, however some owners and participants are far more protective than others, doing their very best to keep such networks secret and to keep the big G away!

This week, however, it has been reported that on September 18th, Google sent out a significant number of manual action notices, alerting site owners that the reasoning behind this was for ?thin content.? It?s never been a secret that Google, in their Webmaster Guidelines, regard thin content as web spam and that it?s just one of many reasons why they may penalise a website, however it?s seemingly the first time such a widespread action has been taken on private blog networks. As outlined above, there?s been an almost continuous slew of large-scale penalties on individual private blog networks (as well as the infamous penalisation of My Blog Guest earlier this year), however until now, nothing on the same scale as this seems to be, with a widespread rollout of manual penalties.

The manual action penalties which Google appear to have sent out to many participating in Private Blog Networks last week are as below: 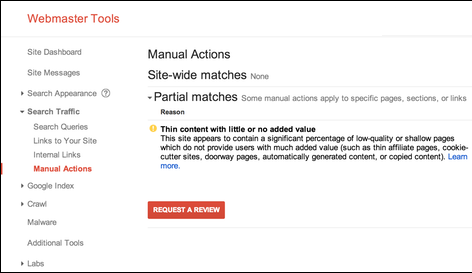 As can be seen, Google are effectively applying a manual action to the sites which have been affected due to ?thin content with little or no added value,? and it is important to understand that, at this stage, Google have not confirmed that it is primarily Private Blog Networks which they have been targeting.

Of course, when you look at the general structure of PBN?s, it makes absolute sense that Google have applied this form of manual action, given that, in most instances, the posts published on such blogs are of a low word-count, are often very badly written and generally add absolutely no value whatsoever to the topic. In addition, blogs are almost always very generic and stick to no particular theme or topic, as you would expect a ?real? blog to. These are simply built and utilised to post spam content in the hope that it helps to push forwards a site?s positions on Google.

Above all, if you?re still using private blog networks as a way to ?try? and rank yours or your clients websites, it?s probably about time you gave it some second thought! Gone are the days where these techniques and approaches even stand a chance of helping rankings and, as can be seen from this weeks reports, Google are still well and truly clamping down on those who participate in such approaches…seemingly going after the source of the problem than the end users of such networks.

This website uses cookies to improve your experience while you navigate through the website. Out of these, the cookies that are categorized as necessary are stored on your browser as they are essential for the working of basic functionalities of the website. We also use third-party cookies that help us analyze and understand how you use this website. These cookies will be stored in your browser only with your consent. You also have the option to opt-out of these cookies. But opting out of some of these cookies may affect your browsing experience.
Necessary Always Enabled
Necessary cookies are absolutely essential for the website to function properly. This category only includes cookies that ensures basic functionalities and security features of the website. These cookies do not store any personal information.
Non-necessary
Any cookies that may not be particularly necessary for the website to function and is used specifically to collect user personal data via analytics, ads, other embedded contents are termed as non-necessary cookies. It is mandatory to procure user consent prior to running these cookies on your website.
SAVE & ACCEPT